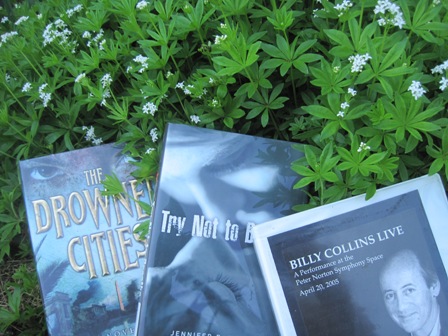 Media relaxing in the Sweet Woodruff

I’m in one of those moods where very little of what I read suits me now. Young adult dystopias promised lots of plot and delivered in Insurgent (the second book in the Divergent trilogy) and The Drowned Cities (companion book to Ship Breaker), however both of them were darker than what I want right now.

What looked like promising adult fiction, was simply disappointing. Garden Spells could have been fun light reading, but the unabridged version I listened to was too predictable. A Reliable Wife looked interesting, but I didn’t care for the characters, who were very obsessed with sex. I need to be able to like at least one of the characters.

The young adult realistic fiction Try Not to Breathe was good, with likable and very human characters.

What really hit the spot was Billy Collins, reading his own poetry in Billy Collins Live: A Performance at the Peter Norton Symphony Space. Five stars! I would recommend that you try it, even if you don’t like poetry.

A little poem for Jessie. This poem is from the book Poems Teachers Ask For: Book II. Not only are “dialect” poems difficult to for me to read, they also can be very sentimental.

It takes a heap o’ livin’ in a house t’ make it home,
A heap o’ sun an’ shadder, an’ ye sometimes have t’ roam
Afore ye really ‘preciate the things ye lef’ behind,
An’ hunger fer ’em somehow, with ’em allus on yer mind.
It don’t make any differunce how rich ye get t’ be,
How much yer chairs an’ tables cost, how great yer luxury;
It ain’t home t’ ye, though it be the palace of a king,
Until somehow yer soul is sort o’ wrapped round everything.

Home ain’t a place that gold can buy or get up in a minute;
Afore it’s home there’s got t’ be a heap o’ livin’ in it;
Within the walls there’s got t’ be some babies born, and then
Right there ye’ve got t’ bring ’em up t’ women good, an’ men;
And gradjerly as time goes on, ye find ye wouldn’t part
With anything they ever used—they’ve grown into yer heart:
The old high chairs, the playthings, too, the little shoes they wore
Ye hoard; an’ if ye could ye’d keep the thumb-marks on the door.

Ye’ve got t’ weep t’ make it home, ye’ve got t’ sit an’ sigh
An’ watch beside a loved one’s bed, an’ know that Death is nigh;
An’ in the stillness o’ the night t’ see Death’s angel come,
An’ close the eyes o’ her that smiled, an’ leave her sweet voice dumb.
Fer these are scenes that grip the heart, an’when yer tears are dried,
Ye find the home is dearer than it was, an’ sanctified;
An’ tuggin’ at ye always are the pleasant memories
O’ her that was an’ is no more—ye can’t escape from these.

Ye’ve got t’ sing an’ dance fer years, ye’ve got t’ romp an’ play,
An’ learn t’ love the things ye have by usin’ ’em each day;
Even the roses ’round the porch must blossom year by year
Afore they ‘come a part o’ ye, suggestin’ someone dear
Who used t’ love ’em long ago, an’ trained ’em jes t’ run
The way they do, so’s they would get the early mornin’ sun;
Ye’ve got t’ love each brick an’ stone from cellar up t’ dome:
It takes a heap o’ livin’ in a house t’ make it home.

Grandma and I have shared many stories from her youth within the last few months. Grandma moved with her family from Milwaukee to Colby to Abbotsford. With one of the moves, Great Grandma must have culled the family book collection. Grandma wished that the book Poems Teachers Ask For had been kept because she enjoyed it so much.

I went in search of a copy of of the book for Grandma and found Poems Teachers Ask For Book II. I’m not sure if Grandma will recognize the poetry in it or not. Based on my favorite poems in the book, I will like your poetry better if your name is Henry. The number of poems written in dialect (Irish accent, southern drawl, etc) in the book surprised me. I almost immediately skip over these, which is probably a loss for me.

I am aware
How many days have been idly spent;
How like an arrow the good intent
Has fallen short or been turned aside.

But who shall dare
To measure loss and gain in this wise?
Defeat may be victory in disguise;
The lowest ebb is the turn of the tide.

If all the skies were sunshine,
Our faces would be fain
To feel once more upon them
The cooling splash of rain.

If all the world were music,
Our hearts would often long
For one sweet strain of silence,
To break the endless song.

If life were always merry,
Our souls would seek relief,
And rest from weary laughter
In the quiet arms of grief.

I wrote some lines once on a time
In wondrous merry mood,
And thought, as usual, men would say
They were exceeding good.
They were so queer, so very queer,
I laughed as I would die;
Albeit, in the general way,
A sober man am I.

I called my servant, and he came;
How kind it was of him
To mind a slender man like me,
He of the mighty limb.

“These to the printer,” I exclaimed,
And, in my humorous way,
I added, (as a trifling jest,)
“There’ll be the devil to pay.”

He took the paper, and I watched,
And saw him peep within;
At the first line he read, his face
Was all upon the grin.

He read the next; the grin grew broad,
And shot from ear to ear;
He read the third; a chuckling noise
I now began to hear.

The fourth; he broke into a roar;
The fifth; his waistband split;
The sixth; he burst five buttons off,
And tumbled in a fit.

Ten days and nights, with sleepless eye,
I watched that wretched man,
And since, I never dare to write
As funny as I can.

Book from my LibraryThing

My Library at LibraryThing